Woke up to a lovely morning and enjoyed the view from the balcony of Yellowstone towering over us to the South: the bare, snow-covered Electric Peak (10,992 feet) to the West and lower, rugged-looking Mount Everts to the East.  In between was the path we’d have to climb back up the towards Mammoth Hot Springs and a day of weird sights.

But first, time to walk across the bridge uphill to the highly-recommended breakfast at the Two-Bit Saloon.  We were perhaps a little bit of a shocking sight to the waitress, cook, and cowboy already there, but the waitress gestured towards the coffee table and told us to help ourselves and they realized we must be ok when we brought our coffee over and sat down at the bar.  I had a massive breakfast burrito stuffed with eggs, ham, peppers, onions, and cheese and Sarah had scrambled eggs again.  My burrito came with loads of chunky salsa and took me a while to finish, but I did.  We talked some and told the waitress and cook about the exotic East … to their fascination … and then after breakfast we moseyed back over the bridge in the now piercingly bright daylight to the hotel.

Took a while to pack for the day since we had no idea what we’d be doing in Yellowstone NP or what temperatures we’d encounter, stopped for gas and coffee at the Sinclair gas station, then drove through the arch at the North Entrance at 10:00 and climbed up to the historic Albright VC (that used to be headquarters of Fort Yellowstone) in Mammoth Hot Springs.  We told the Ranger there that we had to see Old Faithful or else no one would believe we’d been there (she couldn’t argue with that) but besides that we were open to her recommendations about what else to do.  She gave us some good pointers, but Sarah and I concluded from the conversation that we should head for Old Faithful and then just wing it … there was too much there that we could possibly see and do and serendipity would be our guide.

We hadn’t gone far from Mammoth when the fascinating landscape started to make our heads spin and we had to pull over and look at the mammoth(!), terraced overlooking the vista back to the North.  We strolled around on the boardwalks there in the surreal environment.  We’d seen this on television, as we had seen elk in the moonlight and the Grand Tetons and the on TV … but to actually be there and feel the steam around you and smell the sulfur and hear the ground bubbling was beyond real.  The cliffs were bleached white where the springs were not now flowing, and shining with all kinds of blues, greens, yellows, purples, and browns where they were.  We could see far, far away through the blue sky to the North, and off to the West and East around the scraggy cliffs.  We got back to the car and completed the circuit around the crumbling , past boulders gushing with spurts of boiling water and ground quivering with what was just underneath.  Then we got back to the main road and screwed South again, past hot cracks in the earth and bucolic lakes. 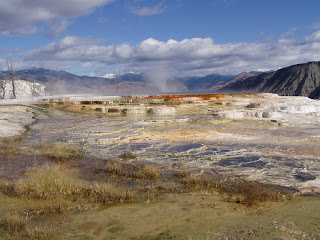 We stopped again at Roaring Mountain, where a landscape of little geysers and oozing springs was spread out up the hillside, crossed the 45th parallel (halfway between the equator and the pole) and then finally into Norris where we detoured into the parking lot at the Norris Geyser Basin for a pit stop and to consult the map.  We decided we didn’t need more information there, and proceeded West towards Madison, stopping soon at the Artists Paintpots, a great recommendation from the Ranger.

There was a small hike here to the start of the boardwalk, through pines and then over ground that you wouldn’t want to walk on for fear of falling through to the center of the earth.  We learned that for most of these boardwalks, rot is totally not an issue, as the mineral-laden water turns them into rock … removing them is the problem.  The boardwalk went around and up the hill, skirting around hot spots of all sizes and varieties.  There were bubbling gray mud holes, spurting and steaming little geysers like the devil was spitting at us, deep blue holes with water swirling around slowly in them, yellow around the edges with a sulfur stink, wide expanses of flowing white spackle, shining sweaty red clay, and trembling green and brown swampy areas.  We ended up going way up the hill to where it turned much steeper, but even there there were cracks in the rock and hard earth, letting out clouds of steam and oozing with red-brown goo.  The “artists” part was easy to see, there were some distinct, beautiful colors in it all, but to try to collect them would be putting yourself in danger.  We looped back to the car after a quick tour of 30-40 minutes or so and continued down past , past the lower and midway geyser basins to the area.

We parked the car in the vast parking lot and took some time to orient ourselves.  The place obviously gets packed in the summer and it was hard to see where to go with the surrounding lodges, snack bars, gift shops, guest lodges, first aid stations, and VC.  But we got it right and emerged by the South of Old Faithful.  Nothing doing there yet, though people (including Japanese, Indian, and Italian groups we overheard) were starting to gather on the benches around it.  We took in the visitor center and filled our water bottles … a sign there said that the next forecast eruption would be at 1:40 … give or take 10 minutes, and that timing was just right for us.  We cruised the small gift shop and then went outside, taking a seat on the bench to the far South, away from the bulk of the crowd.  The eruption was ten minutes late that morning (it happens every 90 minutes or so), but then started up strong and continued for about 4 ½ minutes.  Again, seen it on TV but seeing it live was awesome!  The strong wind blew the water and steam away to the East and the profile from our viewpoint was probably a much better angle than the crowd by the visitor center saw. 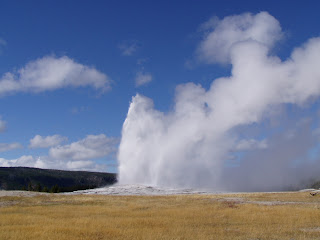 We ate some peanuts while waiting there and then took off across the steaming (there were geysers in the riverbed, under the clear water) around Geyser Hill and up the mile or two of trail along the river valley (this area is over 7000 feet).  We saw quite a lineup of named geysers along the way, all different and all fascinating … especially the twins of Beauty Pool and Chromatic Pool.  We learned that the colors in them were just partly because of bacteria/algae and partly because of temperature, ranging from the hottest blue spots, boiling away in the middle of the big ones to the brown edges, which were cool enough to support trout.  Crossed over the bridge past Crested Pool and Castle Geyser back toward the Old Faithful Inn, stopped in the VC again and looked for hats in the huge gift store across the big parking lot (just stinky ones unfortunately), then wound up back at the car.  This was really one of the most fun parts of the trip as we had seen a landscape nothing like anything we’d seen before.  We’d just missed another eruption of but that was old hat by now. 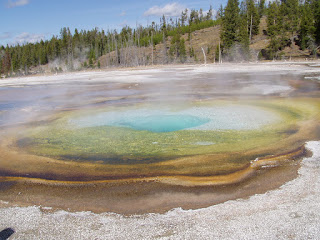 Still plenty of time in the afternoon and so we got going and headed back up to Madison/Norris and then East towards the Canyon area.  A lone bison was stopping traffic on the way, and strolled by us like he belonged there and we didn’t.  Very astute of him.  We had mostly seen lone ones at this point but started seeing some herds that afternoon and by the next day we had seen plenty in all kinds of groups and were treating them as just a commonplace sight.  I’d still love to see the legendary herds of thousands stampeding across the plains, but those days are long past and we certainly saw lots of them at : a very majestic animal.

We were heading for the Grand Canyon of the .  “Hah!” we said to ourselves, “We’ve seen the ,” thinking that anything else with that name would be a weak failure.  But the Grand Canyon of the Yellowstone is easily the second most awesome, incredible river canyon I’ve ever seen, and even exceeds the big one in some ways.  The is raging: it came over the right by the first viewpoint we stopped at along the North Rim with a force that just couldn’t be believed.  It was still solid green water 30 feet over the edge and though the body of the river dispersed some in falling several hundred feet, it absolutely hammered the bottom of the canyon when it cascaded down, making a roar like you wouldn’t believe.  The South side of the canyon it carved was as steep as at the Black Canyon of the Gunnison NP in southwestern Colorado, though much more colorful, and the North side was sloped and studded with hoodoos like Bryce Canyon NP in Utah.  This side was also dotted with some hot spots where fountains of steam jetted up and blew away with the wind.  By then it was late afternoon and the sun burned down with a brilliant light at an angle that put everything into relief and brought out the vast dimensions. 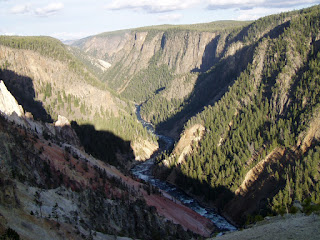 We stopped at several more viewpoints along the North Rim, including Grand View and Inspiration Point.  We were almost alone by now … just one other car there and then it left.  We turned away slowly past some (possible??) rare bristlecone pines, though the wind, the scary heights, and the still awesome roar of the falls made this anything but a peaceful environment.  We knew that soon we’d be watching this same river, calmed down some but still wrestling tumultuously with gravity and rocks from our balcony at the Absaroka Lodge.  In fact, we might see some of the same water molecules by the time we sped up there! 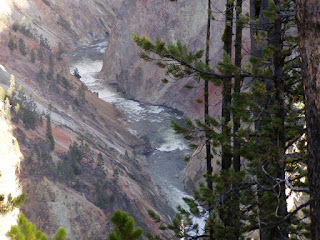 OK, we were toast.  We motored calmly past the turnoff to Canyon Village, then followed the path we had blazed in the dark the day before to Norris, up to Mammoth Hot Springs, and then down the sharp hill to Gardiner and the hotel, where a group of insouciant mule deer were munching on what was left of the garden.  We unpacked and straightened out a bit, then grabbed some adult beverages and sat on the balcony, watching the beautiful tumble by.  Got it together for dinner and walked up to Rosie’s for another meal and brews that couldn’t be beat.  That night I got their chicken, bacon, and artichoke heart special (warning: in most of when they say “and bacon” they mean that bacon will be a significant part of the dish) while Sarah had the Elk Bolognese and we both had some more Bozones.

Back to the hotel after that (actually stopped at the gas station across the street first to pick up some more Rescue Rangers and a nice hat), charge devices, download, blog, post, and bed. 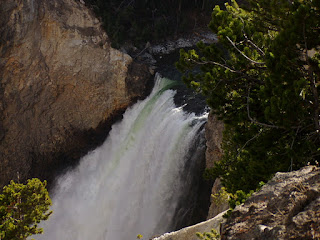