We woke up pretty early (still on Eastern time) to an overcast, chilly day threatening even more snow and hit up the Bears Den across Grand Avenue for a great breakfast served by Broncos fan Terry (football fandom is endemic out West, and though John Elway is a God in Colorado we saw just as many Pittsburgh Steeler and Green Bay Packer shrines, stickers, and clothes as Broncos … no Patriots though).  We were the only ones there for breakfast that day, hope they picked up for lunch and dinner.  I had a breakfast burrito smothered in green chili and Sarah had scrambled eggs and sausage.  Back to the room and packed up all our hiking stuff and then headed for !!

Pulled into the Kawuneeche VC a bit after 9 … we were the second visitors there.  Picked up a book on trees and bushes and had a nice talk with the Ranger, who recommended the Ranger-guided talk at the Coyote Valley Trailhead at 10 and then perhaps the Green Mountain Trail after that.  However, what she enthusiastically recommended was a trail that actually started back in , the East Inlet Trail.  We didn’t know about going back into town, we wanted to get into the Park!  So we left there and headed as far as we could up the glacially-carved between the main range of the Rockies and the off to our left.

We poked around a bit at the Colorado River Trailhead and looked wistfully as the closed road going up into the clouds, then meandered back South to the Holzwarth Historic Site (where we talked with one of the ubiquitous least chipmunks), and then to the Bowen/Baker Trailhead.  There we stopped and listened … though we’d already been seeing great stuff for a day, this was the first time that the thrill of being in such a special place ran through me.  The snow was falling lightly, the towered over us forbiddingly, the plain of the valley extended North and South forever, the world was filled with gray and green and white and brown, and the silence was mystical.  There was no one around besides us and you could hear quiet, quiet, quiet.  I kept listening and realized I was hearing clearly the as it trickled along across the valley. 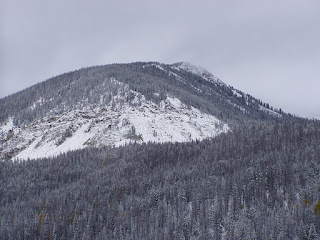 It was getting near 10 so we headed down to the Coyote Valley Trailhead for the Ranger talk, which was given by intern Jacky Phipps, a native and recent Humboldt State (CA) history/geography graduate.  We had a small group but it then turned huge as a gaggle of 13 girl scouts and chaperones turned up.  So we had a good time.  Jacky’s talk covered sociology, geology, botany, and lots of other stuff.  She pointed out that “ ” is an interpretation of the Indian place name Kawuneeche, and how we could see the path of the glacier that carved the valley in the lateral moraine it left on the and the terminal moraine that forms , , and .  She pointed out the Timothy grass that had been planted by early valley settlers and that still dominated but would eventually be replaced by the encroaching Lodgepole pines (if the current pine beetle infestation didn’t get worse).  She told us about the carving of the Grand Ditch into the mountains across the way to funnel water to and how that had affected the valley.  She took her job seriously and this was as good as any Ranger talk I’ve heard. 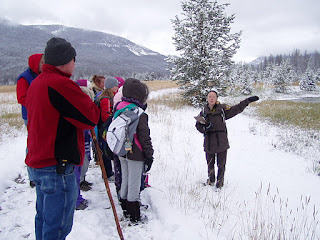 Got back to the trailhead and tried to talk another Ranger with her truck up the hill, but the slow snow had made the slope too slick and she was stuck.  Not us in our 4-wheel drive, we were out of there and pulled into the trailhead a few miles away for a serious hike.  The “moderate” trail started as a bit of mud mixed with slush and went uphill, then uphill, and then uphill at a never-changing grade with the same trees (a mix of Lodgepole pine and Engelmann spruce with a few aspens, birches, and ashes, not to mention the million least chipmunks and golden-mantled ground squirrels) over and over and over on either side.  We started to think we were in a Hanna-Barbara cartoon where the background just repeats and repeats and repeats.  The only difference was that the temperature went down steadily as we gained elevation and the surface was now far from being mud, it was frozen ground with deeper and deeper snow.

We were headed for the Big Meadow marsh and hoping to see some moose or elk, but the uphill climb and the elevation were getting to us, as well as an urge to stop for lunch.  We found an appropriate log next to a meadow that might play host to a moose at some point, and so we brushed the snow off the log and sat down to eat our PB&J sandwiches (prepared at the hotel that morning).  This was beautiful: the day slowly got lighter and lighter as the overcast decreased and the gold of the meadow grass started to shine and the green trees glistened.  The only wildlife we saw however, was another hiker (Jean-Yves from Québec Cité) who at first thought we were a moose but got over it and ended up joining us for lunch.  After lunch we kept on up the trail for another mile or so, before giving up and turning around.  Beautiful place but we’d seen it/done that and wanted to find a hike with better views of mountains.

We decided to head back to the hotel to change our socks (which were pretty wet and cold by then) and then go for the East Inlet Trail that had been recommended to us that morning and was also mentioned enthusiastically by Jacky Phipps.  We hesitated because this was back in town, but we realized that that was a false notion: the town sticks into the middle of the Park and that trail was just as much a wild part of it as anywhere else.  We drove through and got to the East Inlet trailhead around 3:15 and this was it!  We wished we had had more time there … if you ever get to the West side of Rocky, be sure to experience this trail.  A bit along it is , which is a crazy, wild cascade down some wicked-looking cracks in the rocks.  Then you keep going out the “easy” part of the trail and the beauty starts. 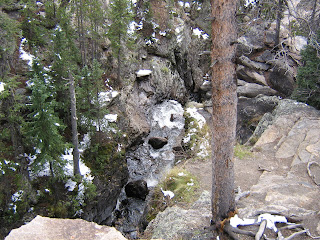 To our right were , , and , all at over 10K feet.  The trail turned a corner and dead ahead of us was 12K foot , covered with snow and gleaming in the late afternoon light.  The valley of the East Inlet stretched out in front of us and led us along and gradually uphill, glowing green with long grass and black with tangled trees while the brown and yellow-orange on the lower slopes to our right gave way to snow, pines, and craggy cliffs as they steepened above us.  The huge boulders the trail went around were spackled with lichens and we kept thinking that around any corner we might see a bear or a moose or a herd of elk.  Unfortunately, no wildlife encounters were to be had if you don’t count the jays and magpies swooping overhead and the woodpeckers making faint echoes high up in the trees.  The trail was marked “moderate” but a disclaimer in the trail guide then went on to say that actually the first part is easy and the second part is strenuous so “moderate” is a dubious classification.  We wanted to keep on, but stopped for a snack and then turned around for fear of darkness.  From there the trail could not go anywhere else but up the crack between Mount Craig and an unnamed foothill to its left, up steeply to Lone Pine Lake and Spirit Lake beyond it (and eventually to the Continental Divide). 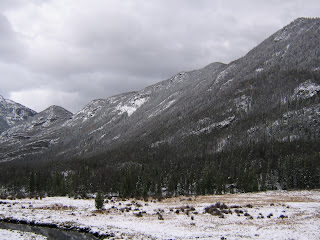 It was already pretty late but the valley of the East Inlet gathered the last power of the setting sun and it was still barely light when we returned to the trailhead and drove slowly back into Grand Lake.  We headed for the hotel to change into our dinner clothes (just kidding here), and then went back to the Grand Lake Brewing Company for bacon burgers and beer that couldn’t be beat.  This is living!  Walked back to the hotel after that to download, post, charge devices, and prepare for an early, early start the next morning. 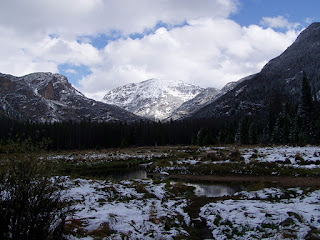