Preamble to Early Fall In the West

I suddenly realized in late September that I had to take another week of vacation before it disappeared (draconian policy of my employer) at the end of 2011. Sarah had some extra vacation days too so we thought that well, we could actually do what we’d always talked about doing someday and go out to the West and see Rocky Mountain National Park (we’d been to Colorado and seen a bit of the Rockies and loved it) and go up to the legendary Yellowstone National Park. All vacation plans over the last 20 years have included our son Dave … and we were immediately bummed at the thought that he wouldn’t be able to do this with us … but we’re beginning to get used to the idea of doing things without him being along.

This was a pretty scary thought in some ways, as well as being a pretty exciting thought. Would we be able to cram in enough fun and have the trip live up to the expectations we’d been building over the years of reading about these sites and seeing pictures of them? What if it rained the whole time or travel arrangements got screwed up? I hurt my knee in the latter part of September and there was a good chance that this would mean a fatal (to the quality of the trip that is) lack of mobility, but it didn’t. I got a cold a few days before we left (as did Sarah) and this was a drag but we got by. But even before these drawbacks proved not to be ruinous to the trip, we realized what they really meant: that we’re not getting any younger and we were lucky/blessed enough to get this chance to rip off a great trip, and we had to take it!

I looked for cheap airfares and scored some fine off-peak tickets to Denver and then researched an itinerary and some hotels along the way and made reservations for the first five of the seven nights we’d be gone, thinking that our old friend serendipity might indicate this to be too much pre-planning or else just enough. As the time approached, excitement swept aside any piddling practical considerations that remained. We made lists, assembled stuff for the trip, and were ready. 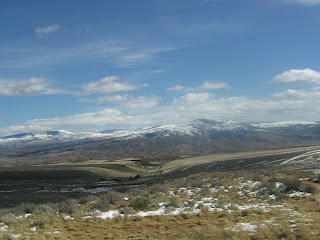